We had a super busy travel year in 2018. We started the year in Christchurch, travelling home via Hanmer and Blenheim. Then Amelia walked the Tongariro Circuit with a friend in February before Mark headed off to Outward Bound for three weeks in March. April saw us on a nearly 3-week-long road trip in the upper North Island, then we hung out in the city in June, and whipped up to the club ski lodge in July a 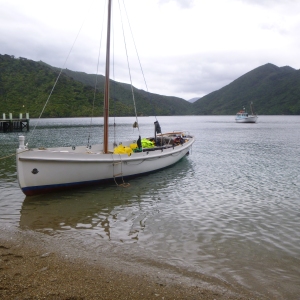 nd August. Amelia also travelled solo for the first time, to Milford Sound, before heading to P!nk in Auckland in September and then Dunedin in October. Our family also went to see relatives at their farm in October, and finally made it back to the bach later that month. We wrapped up the year camping in Hastings.

Something that worked for us this year was sticking with what we knew as a way to expand where we were. We spent a lot of time in group holiday houses that manage to feel familiar because they are all laid out the same, and used them as a base for exploring the wider area. They also keep the cost of travel well down, as they are cheap, and provide full kitchen facilities.

We did something different this year and took an extra child away with us for some of our holiday. In April, we picked up my niece as we passed through Auckland and kept her with us while we did the Coromandel and Bay of Plenty. Mr5 loved having Ms9 along with us and we sincerely appreciated the additional peace and quiet we got with them playing together. Worth 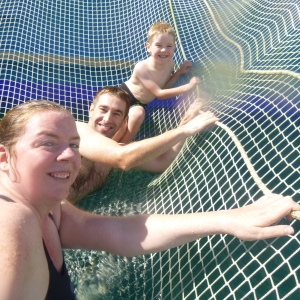 every penny we paid for extra accommodation!

For our second year running, we did a number of new things – and went to a large number of new places. We went jetboating as a family together in January, visited the Far North together, Amelia snorkelled in the ocean for the first time in the Coromandel in April. Amelia also travelled solo for the first time, which she loved (uh-oh). We finished the year on the hydroslides at splash planet – while Mark and Amelia had done a water park before, this was a first for Mr5 and he loved it!

Repeated experiences were a bit more rare this year. We did have two weekends at the club ski lodge, but only one weekend at the bach, as it was undergoing renovations all year. And we wrapped up the year camping, which we’ve now done three times.

Each of us adults had some time away without Mr5, but not together. Marks big trip to Outward Bound was pretty epic, and Amelia adored her short trips to Milford Sound, Auckland, and Dunedin. The goal for 2019 is to squeeze in at least one adult-only weekend. 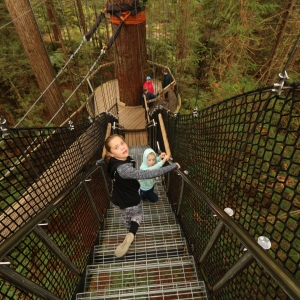 Mr5 took 4 flights and 3 ferry sailings this year. The hardest flight was definitely the one home from Christchurch in early December, which was at bedtime. Thankfully he’d had a good meal in the Koru lounge and the flight ran to time. We also opted to start parking our car at the new parking building at the airport, despite the extra cost, when we had early departures or late arrivals. Sanity saving!

Our year opened in a holiday rental and closed in a camp ground. We abandoned plans for a friends and their kids mid-winter Christmas weekend at the bach because renovations weren’t complete. Other than that, our only trip we cancelled was turning back half way 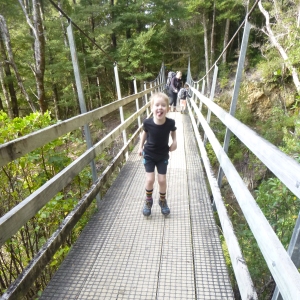 to Paua Hut when Mr5 and Amelia went without Mark.

Our biggest drama of the year was Mark breaking his collarbone while away up the skifield. Amelia and Mr5 were preparing to head to the farm for a few days when we got the call. Thankfully Jared was driving south with Ms9 at the time, and managed to detour to collect him. Extra thankfully, it wasn’t massively expensive to add a car and second passenger to Amelia’s existing ferry booking for the next morning.

This year we definitely proved that having other kids with us makes travelling with Mr5 easier. While he was generally good on our 2 weeks in the far north, he was also far more needy of our attention than he was while we were in the Coromandel and Bay of Plenty. With this in mind, we’ve got a friend and her two boys joining us in the Abel Tasman in April, and hopefully another friends kid joining us on S 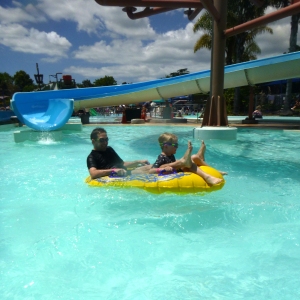 Our plans for 2019 are looking pretty epic again. Mark got a free entry to a week long conference in Melbourne over his birthday, so Mr5 and Amelia will head over to join him for a long weekend. April and October school holidays will see us hitting up some Great Walks as a family, August we’ve got Jared and Ms10 joining us in Queenstown for a bit of skiing, and we’ll wrap up the year at the ski lodge, all going to plan.